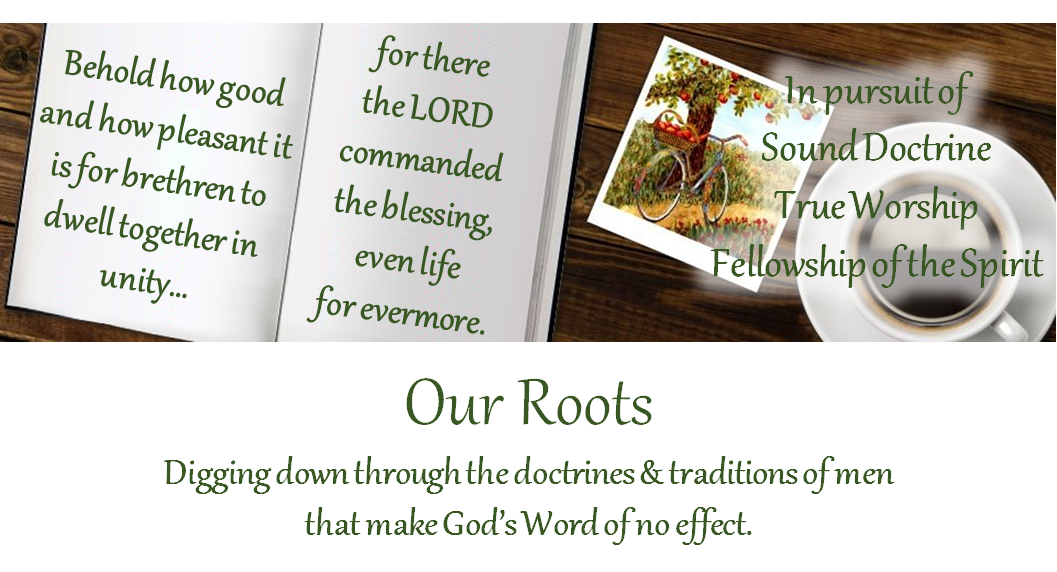 "BELOVED, WHEN I GAVE ALL DILIGENCE TO TO WRITE UNTO YOU OF THE COMMON SALVATION,
IT WAS NEEDFUL TO WRITE UNTO YOU, AND TO EXHORT YOU THAT YOU SHOULD EARNESTLY CONTEND FOR THE FAITH WHICH WAS ONCE DELIVERED TO THE SAINTS" (Jude, Verse 3).
Those were glory days, but also days of sadness and hurt, as Sprit-filled believers were ejected from all Christian denominations because some of their strange manifestations did not belong in civilized society.  Finding themselves the subjects of religious persecution and with nowhere to go, they met together.

They met in barns and one-room school houses and grape arbors; anywhere they could to worship God in this newly-restored experience.

They mostly stayed together, outside the realms of organization, held together not by doctrine—for they had come from every Christian persuasion—but by the fellowship of the Spirit.

The storm clouds of World War I loomed on the horizon, and the Pentecostals—as they had come to be known—began to contemplate organizing, largely to avoid the draft by claiming Conscientious Objector Status for their young men.

The United States had been founded on separation of church and state, and so exempted young men if they could show a letter from a government-recognized religious organization.

During this time however, the Lord moved on the young children, who would one-by-one stand on chairs in their services, weeping and begging the adults not to organize.  “God does not want His people divided again,” was the message.

Despite these entreaties, organizations were formed and leagues were made.  Now, by default, doctrine became an issue again; those who believed alike stayed together, and those that didn’t were not as accepted.

Those that felt not to denominate now had nowhere to go, and found themselves outside the circle of those who were once their friends.

This is where our story begins.

In the midst of all this doctrinal confusion, the Lord called this  humble man.  His personal testimony was that the voice of God thundered out of heaven, saying “I want you to preach MY gospel!”

As Brother Will—as they called him—delved deeper into Christ, the Lord began to give him some amazing revelations from the Bible.  But when he shared them with others, they thought him to be a false prophet and rebuked him.

This was discouraging to the young preacher, to the point that he stopped sharing his revelations.  The anointing lifted off of him, and by the end of six months he begged God to bring it back, saying he would tell anybody anything that God had given him, if only he could feel the presence of God again.

In 1914 he and two other brothers were making their way to Hot Springs, Arkansas as delegates to bring about a new Pentecostal denomination, when the Lord showed him in a dream not to do so.  He turned back, and the other two went on.

During this time, thousands who felt not to organize had no where to go, and the Lord began to use Brother Sowders in mighty ways.  People and other ministers began to be drawn to him, like the animals were to Noah at the ark.  They just kept coming.

Their first non-denominational meetings were at Elko Hill in Illinois, and the Lord began to establish Brother Sowders as a leader among them.  There they found liberty in the Spirit, because “the Lord is that Spirit: and where the Spirit of the Lord is, there is liberty” (2 Corinthians 3:17).

Early on, God gave Brother Sowders the understanding of why the Spirit was given in the first place: it is to guide us into all truth, as Jesus said in John 16:3.

He pointed out that, though they had liberty in the Spirit, they had not allowed the Spirit to guide them into truth, because they all still believed many doctrines differently.

He said it wasn’t the Spirit that sets God’s people free.  The Spirit gives liberty, and guides us into the truth, but “ye shall know the truth, and the truth shall make you free” (John 8:32).

This group of Spirit-filled believers that were outside the realms of denomination began to understand that this was a major reason why the Holy Ghost was given: to lead them into truth.  They began to pray for God to unite them in doctrine as He had in the Spirit.

The Apostle Paul had besought the Early Church “that you all speak the same thing and that there be no divisions among you; but that ye be perfectly joined together in the same mind and in the same judgment.”  (1 Corinthians 1:10).

David sang in Psalm 33 that “God commands the blessing when brethren dwell together in unity.”

William Sowders preached that—just as the Early Rain ministry produced a harvest for Christ—so the Bible spoke of a Latter Rain ministry doing the same.

He preached on Solomon’s Temple and how it had been destroyed and the people taken to Babylon.  He used this as a shadow and type of The Early Church losing its glory and “going into the wilderness” of the Dark Ages, or “Babylon,” which means confusion.

He brought forth scriptures that God would bring the church into its glory again, as it “came up out of the wilderness, leaning upon the arm of her Beloved.”

God was calling to “return, return, O Shulamite; return, return, that we may look upon you.  What will ye see in the Shulamite?  As it were the company of two armies” (Song of Solomon 6:13).

“We have to build on the foundation of the Early Church!” Brother Sowders said.  “We have to dig down through all the tradition of the last 1900 years to get it right!  And when we do, though this temple may not be as grand, God has promised that "the glory of the latter house shall be greater than the glory of the former house, and I will fill this house with glory, and in this place will I give peace, saith the Lord!"
(Haggai 2:6-9)

They discovered that both temples had been built on the place where Abraham nearly sacrificed Isaac, which was also the threshing floor that David had bought and offered to God to stop the plague of death.

This was appropriate, because a threshing floor was used to separate wheat from chaff.

that sits by—let the first one hold his peace.  For ye may all prophesy (or preach) one by one, that all may learn, and all may be comforted.  And let the spirits of the prophets be subject to the prophets” (1 Corinthians 14:29-32).


They called this order of service “The Threshing Floor,” and the stories are that sometimes the spirits of the prophets got a bit heated when their doctrinal beliefs were challenged by other preachers with different scriptures!  The stories go that occasionally some preacher would say, “Let’s just step outside, and I’ll show you how many are in the Godhead!”

Brother Sowders would then call for a calming of spirits and lead them to pray until they again could go on.

“I can take two cats," he said, "and tie their tails together and throw them over a clothes line.  They’ll surely have unity of spirit, but it won’t be in the bonds of peace!"  This would help everybody settle down, and remember the goal they were working toward.

"The rich man is wise in his own conceit; but the poor that hath understanding searches him out"
(Proverbs 28:11).

A scripture that held deep significance to these humble men of God was Isaiah 52:8.  “Thy watchmen shall lift up the voice; with the voice together shall they sing: for they shall see eye to eye, when the LORD shall bring again Zion.”

Coming together from all Christian persuasions to contend earnestly for the faith that was lost, these men were attempting something that had no precedence in the history of the church.  Not only they, but the people, too, became Bible scholars.  In fact, Brother Sowders began to call these meetings after Elijah’s school: “The School of the Prophets.”

William Sowders was known for his love for all people.  He stressed over and over the need for fervent charity one to another.  In a day when different doctrine made bitter enemies of people, he defied this by seating a Trinitarian minister on one side of him and a Oneness preacher on the other side.  During the service he would peel an apple, split it down the middle, and give half to each man, sending a clear message to the people on loving without partiality, and also gaining the respect of those preachers.

for Biblical gold--perhaps it is appropriate, and not so coincidental, that it is located nearly overlooking Fort Knox: the place where the U.S. Gold Reserves are kept!

Many meetings would last for up to ten days, and sometimes they would thresh all through the night.  As the years passed, doctrine after doctrine was thoroughly examined from every angle and by every scripture in the Bible that pertained to it, by every minister who had an opinion.

When working through a particular doctrine, they chalked every scripture relating to that subject on a large blackboard, and threshed and debated and prayed and went away and studied more.  Finally, when it seemed a particular doctrine could be threshed no further, a peace from Heaven would come over them all.  The Holy Ghost power would fall and crown their efforts.  As they worshiped, they knew God was giving His approval, and saying, “You got it right.”

This is how the basic doctrine we preach came to be; not by the decree of a few people, but by hundreds of Spirit-filled, God-fearing men from all denominational backgrounds.  They stayed together, learned to honor one another, and threshed out the word of God in hopes to return to the original doctrine of the Early Church.  Through this Biblical order of service called they called The Threshing Floor, they proved all things, held fast to that which is true, and let go of that which was proven false.

"Knowing this first, that no prophecy of the scripture is of any private interpretation.  For the prophecy came not in old time by the will of man: but holy men of God spake as they were moved by the Holy Ghost" (2nd Peter 1:20-21).

Brother Sowders died in 1952.  There is no way to tell how many people today world-wide trace their roots back to him, but it is probably upwards of 50,000 and possibly many more.

It is now the 4th and 5th generation of ministers that has come to be since this great move began.  Though we never organized, we are not a loose fellowship, but continue to work on being fitly framed together and dependent upon one another.  We still preach that the spirit of the individual preacher is subject to the other preachers, and that in the multitude of counselors, there is safety for God’s people.

We still have more to learn; we do not claim to have it all, but we are blessed to have the beautiful truths we have.

Like any fellowship, we have had splits and re-dedications of old alliances, but through it all God has been with us in our search for truth.

We still have threshing floors, and will until the watchmen see eye to eye and the Lord commands the blessing of life forevermore.

We honor William Sowders as a leader that God greatly used to begin this work, but he never wanted to be lifted up higher than any of the other men of God who dedicated their lives to the threshing floor.  He taught us to honor Christ above all.