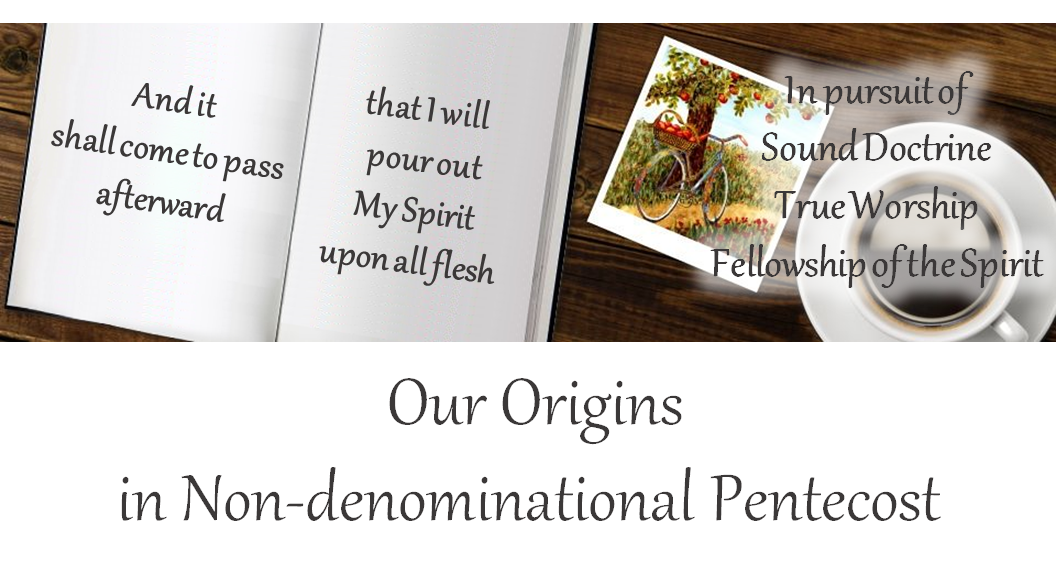 In the last half of the 1800's, influenced by great ministries that God had raised up, a hunger for more of the Lord gripped God's people, and thousands began to seek the Lord in earnest for deeper truth, and for the gifts of the Spirit to return to the church.

In answer to these earnest prayers, God poured out His Spirit in tremendous ways, including the restoration of the Biblical gift of tongues.  This ushered in the beginnings of the Pentecostal Movement in 1901, and quickly led to powerful new moves of God, such as the Azusa Street Mission in downtown Los Angeles in 1906.
Later, the Apostle Paul helped put these things in perspective, when he instructed to “quench not the spirit,” and “forbid not to speak in tongues,” but also told when and where it was appropriate or not appropriate to do so.  As always, just as in the early 1900’s, the enthusiasm comes first, and the maturity comes later.

These years of revival from 1901 to 1914 were also years of great heartache and rejection.  Seemingly, God had poured out this new experience without partiality, and across all denominational lines.  Those that experienced this were viewed as religious radicals, or even demon-possessed, and ex-communicated en mass.  Hundreds of thousands found themselves outcasts from respectable religious society, with no where to go.

They met in barns and one-room school houses and grape arbors; anywhere they could to worship God in this newly-restored experience.

They became known as Pentecostals, after the original Day of Pentecost outpouring in Acts chapter 2.

They believed the Apostle Peter, who on that day, yelled out to the crowd: “This is for you, and for your children, and their children, and all that are afar off,” meaning the generations to come.

Jesus had told them “You shall receive power to be my witnesses after the Holy Ghost comes upon you,” and then told them to tarry in Jerusalem and wait for it.

It was this Holy Spirit power that propelled the early believers to do the exploits recorded in the book of Acts and beyond.  They worked in the light of the Spirit of God.

Jesus had told them to “work while it is yet day, for the night is coming when no man can work.”

After reaping a known-world harvest for Christ in the Early Church, night began to set in as the apostles died off the scene.  Grievous wolves came in, introducing new doctrines and overthrowing the faith of many.

Jude desperately wrote to the Body of Christ to “contend earnestly for the faith that was once delivered to the saints.”  In Revelation, God told the seven churches of Asia that they were in danger of losing their candlesticks, and they would no longer be the light of the world.

As darkness set in, the church went into the wilderness.  The power of the Holy Ghost was replaced by religious traditions that became accepted as God-ordained, but that only offered a form of godliness and denied the power.  The words of the Apostle Paul had come true: tongues had ceased; prophecies had failed; knowledge had vanished away.

But now they were beginning to come back!  Eighteen hundred years later, God was faithful that promised: “In the last days I will pour out my spirit upon all flesh.”

What held the Pentecostals together was not denomination, for they had no denomination.   Neither was it similarity of doctrine, because they all believed differently, coming from all Christian persuasions.  What held them together was this new Spirit that they shared.   Some organized, but most remained non-denominational.
Avoiding the draft became a major motivating factor in the formation of Pentecostal denominations.  But Charters of Rights and Statements of Faith had to be submitted to the government for exemption to be given.  By necessity, doctrine now became an issue, and those that had received the Holy Ghost Baptism  began to divide over it.

During this time, however, when most adults were interested in organizing, God moved upon the little children in their services, as they stood on chairs with tears running down their faces, pleading “Do not organize!  God does not want his people divided!”

Most didn't listen, forged ahead, and divided.  Those that did not organize now became the outcasts of Pentecostal society, as was the spirit of that day.  They still had no headquarters, and no unifying doctrinal beliefs except for three things:

1)  What they had in the Spirit was real;
2)   God did not want them to denominate, and
3)  They needed to stay together.

That is where our story begins, and that is why we are a Spirit-filled, but non-denominational, fellowship.

(The story continues, showing the origin of our fellowship, under "Our Roots.")